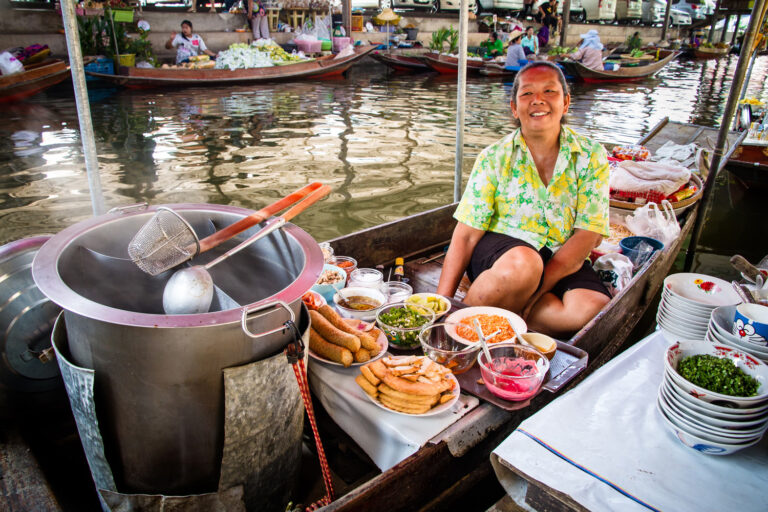 Travelling is all about embracing and getting to know more about global cultures and flavours. The travelling part of the journey, from your country to your intended touristic destination, is relatively easier as you simply need to book tickets with your favorite airlines. However, to get to know the country’s culture more, you need to delve into its street food, where the true flavours of a nation are hidden.

This is exactly what Street Food Asia does. The mini TV series Street Food Asia which premiered in 2019 on Netflix, takes the viewers on a vibrant and gastronomical adventure through the streets of Asia in some of the world’s most colourful cities. Cause what better way to explore a country’s culture than its cuisine?

Taking notes from the series, we have gathered more on the local food culture of the amazing cities and cuisines we saw to give you more insight into these places, and their food.

The inspiring story of street food chef Jay Fai, as she shared the creative journey of her Michellin star-winning crabmeat omelette, is guaranteed to make anyone crave her signature dish. The culinary gems of the “Land of Smiles” do not stop here! The Old City quarters are famous for its Pad Thai, or Khao Phat, Thai fried rice. The unmatched feeling of enjoying boat noodles or Kuay Teow Reua by a lake or any other water body sold both on boats and land can only be experienced in Bangkok.

If you wish to move away from the traditional soup, rice and noodle dishes, if you are up for a bit of adventure, deep-fried insects are a speciality in the country’s street food scenario. Ranging anywhere from grasshoppers to scorpions, these nutrient-filled snacks are cheap, crunchy and can be munched as you explore more in Bangkok.

You can find really affordable flights to Bangkok right now if you book through reliable travel apps like Wego, as the country is looking to recoup its loss during the pandemic. So, what are you waiting for?

As revealed in the series, Osaka’s are known for spending more money on food than any other Japanese. They don’t use the phrase kuidaore or “eat till you drop” for nothing, as Osaka has one of the most diverse street food varieties in the world. Tako Tamago is the most eye-catching of them all- the baby octopus looking like bright, red lollipop sticks stuffed with quail eggs dipped in sauce stand out the most.

In Street Food Asia, we saw Toyo, the beloved chef behind one of the most famous izakaya’s or informal bars in Osaka, specializing in local favourites such as okonomiyaki and takoyaki. The crispy octopus meat-filled balls are best served with soya sauce and mayonnaise.

Unsurprisingly, Delhi cuisine is as versatile as its eclectic population. It can be loud and boisterous like the spicy, classic North Indian chaat items such as pani puri (puffy, crisp doughs served with spicy water) or chole bhature (deep-fried bread served with curry) to sweet and soft melting special ice creams such as kulfi or the milk dessert rasmalai.

While Delhi’s street food seems to be loaded mostly with vegetarian options, the city has also preserved the Mughlai traditions and specialises in serving authentic dishes such as kebabs and mouth watering lamb and chicken gravy that can be served with rice, roti, bread and more.

Besides the popular local delicacies of Yogyakarta, such as gudeg and cassava noodles showcased in the series, the city is known for its traditional arts and cultural heritage, as embodied in its age-old cuisines. Try the Garang Asem Kudus, classic street food of the area, where chicken is cooked in banana leaf, along with spices, thick coconut milk and bay leaves, to add more taste to the soft chicken meat.

Coffee lovers are in for a treat, as Yogyakarta specialises in charcoal coffee, where hot, sizzling charcoal is added to strong black coffee giving it a distinct flavour you won’t get to see anywhere else.

The streets of Taiwan, filled with family-owned restaurants and businesses, boast preserving 100-year-old traditions without compromising on taste or flavour. Chiayi is known for its mouthwatering delicacies, from banzai noodles, oyster vermicelli, Taiwanese sausages, beef pork rice and more. The origin story of tofu pudding, fish head soup and goat stew, as narrated by the series, equally evokes a sense of craving towards these delicious treats.

If you are a keen follower of the Korean pop culture scenario, you must be familiar with their colourful array of cuisine. In Seoul, the capital city, the food stalls of Gwangjang Market, one of the country’s oldest markets, are known to sell some of the best street food options in the whole of South Korea.

Remember Attorney Woo Young Woo’s favourite dish gimbap, from the Netflix series Extraordinary Attorney Woo? This addictive love towards gimbap of Gwangjang specialises in serving different flavours of gimbap, whose addictive flavours have often been referred to as narcotics or mayak gimbap.

It is very accurately said in the docu-series Street Food Asia that Vietnam’s history and culture form its cuisine, like most Asian countries. While French colonists bought bread and other European dishes with them to Vietnam, Ho Chi Minh has beautifully grown over the ages to evolve these dishes as their own, giving rise to Vietnamese baguettes or ban mhi. Clams, crabs, scallops, and sea snails such as mud creepers are other local favourites of the city.

Food forms a big part of Singaporean identity, as the diverse cosmopolitan has a wide range of cuisines not only from Singapore but with Malay, Peranakan, Chinese and Indian flavours. While Hainanese chicken rice has often been described as the unofficial national dish of the country, other specialities include wanton noodles, meat on skewers called satays, chilli crabs and fish head curry.

Putting into use the rich biodiversity of the Philippines, home to one of the most diverse exotic sea creatures, the locals of Cebu specialise in serving nilarang fish soup and reef eel soup, which you cannot find anywhere else in the world. The freshness and the unique flavours of these dishes are unmatched and unique to Cebu’s street food scenario.