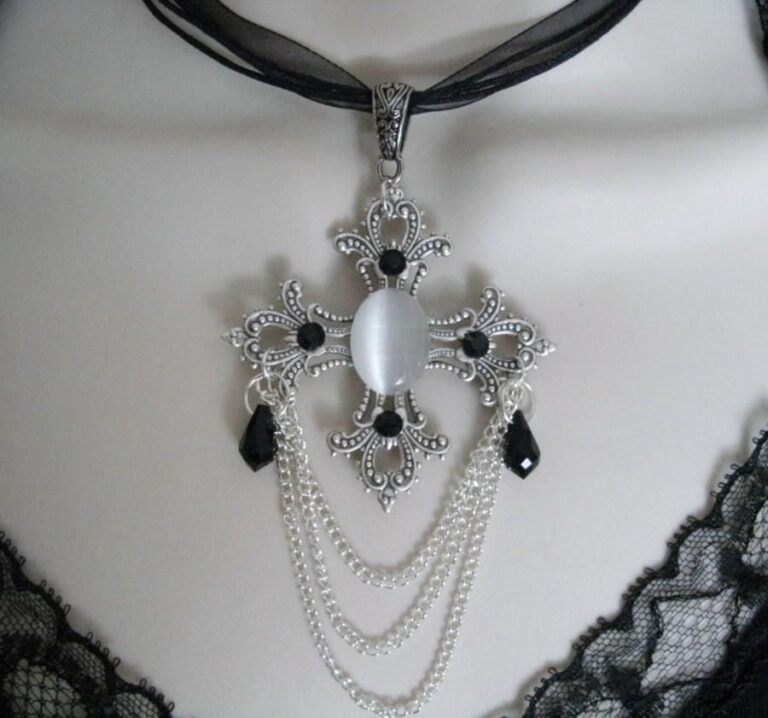 The Gothic subculture is something we are all familiar with. Dark wardrobe, make-up and overall gloomy aesthetics are what make Goths recognizable. This whole movement emerged in the late 1970s in response to the punk movement that was dominant at the time. The entire Gothic aesthetic is inspired by death, night creatures, ghosts, darkness and other gloomy things. Although decades have passed since the Gothic movement saw the light of day, it is still very popular and their heritage is passed down from one generation to the next. In today’s article we want to share more about Gothic jewelry. If you are not versed in this field, and you want to understand it better, then our few tips for understanding the symbolism of Gothic jewelry will be useful to you.

1. Turn on your dark side to best understand Gothic jewelry symbolism

We all have a dark side, although many of us try to suppress it because we think the bright side of life and optimism is the way to go. However, the Goths would not agree with you, because their world is not only facing the dark side, but celebrating it. When you turn on your dark side while trying to understand Gothic jewelry things will become much clearer to you.

Gothic culture is directed towards hostility, mysticism, unhappiness and the dark side of life. Anything that is bright, warm and optimistic is unacceptable in the Gothic world. It can be said that this culture is monochromatic, and that it is black and white at best. It is ideal if you do not have to add color to your clothing combination. However, not all colors are completely banned in the Gothic subculture – there are some that are somewhat acceptable: for example, purple, blue and green. The only warm color that Goths choose to wear as part of jewelry is red, because it symbolizes blood, anger and passion, which are some of the key concepts that this movement supports. Yellow, orange and other warm colors for Gothic do not exist.

The only bright color that is celebrated in the Gothic world is white, which leaves many ignorant of this culture astonished. However, if you turn on your dark side and think a little deeper, you will realize that this is actually quite logical: the moon and night light are vital for the children of the night. And that is exactly what Goths are. However, keep in mind that white as such is not used often, but is presented as part of jewelry through the silver color of the metal.

If you are intrigued by Gothic jewelry and want to find some pieces for yourself we suggest you check out bikerringshop.com. You will discover a whole world of interesting and controversial jewelry, and then you can choose a ring to your liking.

2. Check if  you already have some jewelry that was created under the influence of the Gothic subculture

Gothic jewelry has become so popular that today most people have it in their home in some form without even realizing it. We suggest you run your jewelry and conclude if you already own something that was created under the influence of the Gothic subculture and try to figure out its symbolism.

To help you with that, we share with you one of the concepts that is valid in the Gothic world, and that is that this fashion is adapted to everyone and no one at the same time. This duality runs through this whole movement (as we have already mentioned, the main colors used by the Goths are black and white). How is it possible?

Well, it is clear to all of us that garments and jewelry made under the influence of Gothic in most cases are not something that anyone could wear. Or at least, what he could wear without attracting the astonished looks of the people on the street. The symbols are darkness and hostility, which means that they are not completely adapted to the everyday look. So yes, Gothic fashion was adapted to a small, specially selected group of people who decided to dedicate their lives to celebrating this movement. However, the fact is that today Gothic as a fashion style has a more comprehensive approach.

Black pearls, silver chokers with embedded diamonds… who could say no to such amazing pieces? Probably you can also find a necklace or earrings in your jewelry organizer that exude Gothic style, and which you enjoy wearing on a day-to-day basis or for special occasions. If you want to add a new collection of gothic huggie earrings you can see this link. Gothic pieces of jewelry are adapted to everyone and no one, and that is their emperor.

3. Open yourself to contradictions and observing things from completely opposite angles

Gothic culture is a cultural contradiction, which is one of the main reasons why it is so confusing to understand for most people today. However, to understand the symbolism of Gothic jewelry, you only need to expand your mind and open yourself to looking at things from different angles. There is no room for limited thinking in this subculture.

Where does this contradiction come from? It starts with the fact that Gothic originated as a style used to build magnificent Catholic cathedrals in the Middle Ages. Would we connect the Goths with religion in any way today? Definitely not, but that doesn’t mean one excludes the other.

Gothic was named after the savage Germanic tribe, whence its barbaric, rebellious style. And that same style has adorned some of the most important religious buildings in the past. Only when you are open to such contradictions can you understand the power of symbolism in this subculture.

What Makes Gothic Jewelry so Special?

Gothic jewelry is beautiful, and inspiring with its dark aesthetic, and unique shapes, and is often unisex. This means that it can be worn by both men and women who enjoy this style. Right away, we must emphasize that the Gothic style is not for everyone. It’s really beautiful jewelry, but it can be too dark and cold for some.

On the other hand, there are also connections with certain religions, although the symbolism is far from religious. Sometimes people consider the Gothic style pagan, which proves that it is actually a culture with many contradictions.

And of course, although the complexity of the craftsmanship is obvious, this jewelry actually uses clear and simple lines. So, it can be said that jewelry is really the key element of the Gothic style for people who adore it.

Why not? If you like the style, then you can wear it combined with your usual way of dressing. Gothic subculture unites several concepts such as passion, obsessiveness, romance, but also tragedy, bitter reality, and suffering. As we have already said, it is a culture of contradictions. That’s why the elements of Gothic jewelry can be contradictory.

Most of the jewelry is monochromatic, but in modern designs, you can find combinations of black, white, and red. Sometimes even precious stones are part of the designs. A transparent gray can often be used, as an association for dark foggy weather, but also blue, so that it can be associated with twilight.

Of course, the motives for this kind of jewelry are dark and there can often be skulls, a pierced heart, and a coffin, but on the other hand, only simple shapes combined with the recognizable ornaments typical of the Gothic style.

Finally, it is important to emphasize that the way gothic-inspired jewelry is designed does not mean that it is by default associated with the subculture. It’s just that some shapes are so inspiring that they become a trend quite unintentionally.

What symbols are used in Gothic jewelry?

When you look at Gothic jewelry, what you can easily notice is the integration of many cultures, ancient and religious symbols, and a modern approach to jewelry making. For example, you can often see an Egyptian ankh as part of the design, but also a Celtic cross. The purpose is to remind us of something ancient, forbidden, and terrifying, which at the same time evokes respect among those who wear it.

If you look at Ideaure you will see that all these elements fit into modern jewelry design. This means that the Gothic style has long since been intended for a wider audience, rather than just members of that subculture. Even if you like the elements of this style too much, it is not a problem at all to choose a piece of jewelry that will fit into your everyday life.

The symbols in Gothic jewelry are nothing more than shapes and colors that we associate with a specific culture. They derive from already known concepts but are incorporated in a different way.

The Gothic subculture is very special and different, so most people who are not versed in this sphere may have difficulty understanding it. However, if you want to better understand the symbolism behind Gothic jewelry and fashion style then we suggest you embrace your dark side, open yourself to contradictions and check if you may already have pieces of jewelry influenced by the Gothic subculture and that you enjoy. It is important to open your horizons and remove prejudices in order to understand the duality and dark concept of the Gothic movement.