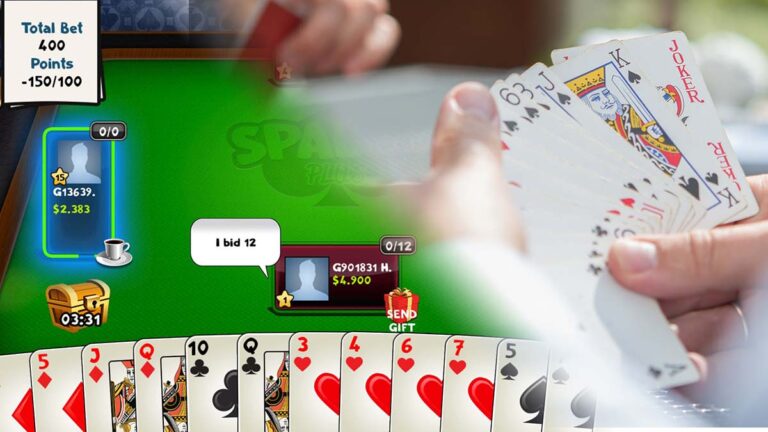 Spades is probably one of the most challenging and entertaining card games at offline or online casinos. One of the reasons that make it so challenging is that it can be played with a partner. Not knowing what cards that partner holds can make it very hard to win at Spades, especially if that person does not know how to play.

For those who don’t like to play with a partner, there are two other Spades options: cut throat and individual. Both of these versions allow each person to be accountable only for the cards in his or her own hand. While this can be a less frustrating way to play, it can also take away a lot of the fun to be had with partners.

How to Play Spades

Four people sit around a square table so that no one can see anyone else’s cards, with partners sitting opposite each other. A deck of 52 playing cards is dealt so that everyone has 13 cards. The person to the left of the dealer goes first and bets how many tricks (rounds of 4 cards each) he/she can win. Once all players have made their bets, the first person then can lead with any card except a Spade.

The object of the game is to bid and acquire a certain number of tricks. It requires strategy and a bit of guessing. Not only does the player have to estimate how many tricks he/she can win, but also what the partner can win. This is vital since points are lost if both partners do not win their total number of tricks. If a player bets nil (zero tricks), 100 points are awarded if successful, but if not 100 points are lost (this can fluctuate depending on which online site is played). So it’s very important to back up a partner who has bet nil.

Tips on How to Play Spades

Assuming that anyone reading this already knows the basic rules of Spades, let’s skip ahead to the best way to play the game. For the most part the key to winning is by paying attention to what cards the partner places on the table. If he/she has bet nil, the other player should always lead with a higher card. Never play a small card, since there is no way of knowing what the smallest card of that suit the partner has. The opposing team will certainly play their lowest cards in hope of forcing the nil partner to win the hand and lose the points.

Winning a nil hand can be a bit tricky, so it’s best to know when to bet it. Don’t ever try nil unless at least two low cards of every suit is held. Also, don’t try nil if holding any spade higher than a ten. When playing nil, be sure to always keep the lowest cards in a suit to use last. Opponents will play low in hopes of forcing a nil better to win a hand. Keeping those low cards until the last few hands ensure winning the points instead. Also, if a suit is played that is not held, use the highest card of a different suit (other than spades) so as not to be stuck with it in the following round.

If a spade is led and a player has no spades to follow, any card held can be played. If player still needs to win tricks, this card should be low. For instance, don’t play an ace of hearts if the two of spades has been placed on the table. Along those same lines, players should never use a high card or a spade if their partner has already played the highest card that round.

If the highest card held is a King, never play it until the Ace of that suit has been played. The best way for that to happen is to play a middle card like a 9 or 10. Whoever has the Ace will surely want to win the hand and will use it. Then the King will be the highest card of that suit.

How to Bet Tricks in Spades

Sometimes it’s hard to know how to bet tricks. First count all the Aces and Kings in hand. Next count the number of cards in each suit. A good estimate is that each suit will most likely have three rounds. If there are only one or two of that suit in hand, it is safe to estimate that at least one round can be trumped by a spade. Lastly, if more than 3 spades are held, any above that will likely be used as a trump.

Caution must be used when over bidding though. Pay attention to how many tricks are bet by the other three players, especially the partner. Be wary of betting more tricks than the maximum per round for all players, which is 13.

Pay Attention to Your Partner

According to toponlinecasino.my website, The quickest way to lose the game is by ignoring how your partner is playing. It can be quite frustrating for a team if one member is oblivious to what is going on across the table. It is highly recommended for all new players to have a few practice rounds before starting the game. There are several sites online where new players can practice Spades with the computer first before joining an actual tournament. The game can be played for free, or real money can be bet.

Whether online or in person, Spades is a great way to get together with friends or make new friends. Be sure to check it out, but be careful. It is very addictive. It can insist on playing always, on a regular basis. If played using real money, it is suggested to avoid chasing losses. Moreover, experts recommend playing within the risk attitude as it is a game based on luck and strategy. The two may not always go good together.