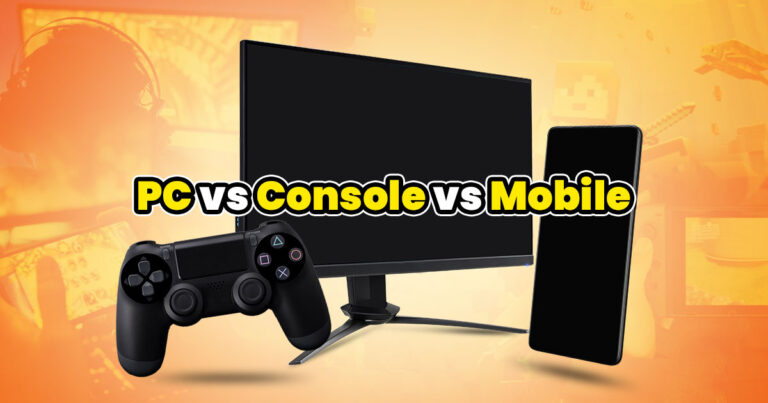 A fierce and perpetual debate about which console is the best will rage between fans of the Xbox and PlayStation for as long as Microsoft and Sony continue to pump out their hardware. The reality, of course, is there’s little difference between the two, aside from a few exclusive titles and the aesthetics of the machines themselves.

There is, on the other hand, much bigger differences between the properties and qualities offered by other formats. While playing Grand Theft Auto V on an Xbox Series X and PlayStation 5 offer nearly identical experiences, the same can’t be said about the PC. For smartphones, it’s not even possible to play GTA V, but there are other benefits on offer instead.

So which one is best?

If you’re buying a new device to enjoy games on, you need to make sure it is compatible with whichever titles you want to play. However, if you’re someone who likes to always try something new, then your focus might shift towards the range of choices you have available to you on a prospective platform.

Smartphones, in comparison, grant players access to more than a million different games. This is done through the Apple App Store and Google Play Store, both of which have over many more titles than the PS5.

Computer owners get even more choice. Thanks to the openness of the Windows operating system and the decades of development for it and its predecessor DOS systems, there are several million games that can be enjoyed on PC.

Not only that, but PC owners have access to an ever-growing number of browser-based games. These include a wide range of options that includes everything from simple puzzle games to AAA titles like Fortnite right from inside Chrome, Edge, or Firefox.

Online casinos are another option for PC and mobile gamers. There are dozens of iGaming brands that allow players to place wagers on games through a web browser, dedicated software, and/or a mobile app. Competition is strong in this space, so new players can often claim bonuses and promotions on comparison platforms such as OddsChecker when they create a new account, giving them the opportunity to try out multiple sites to gain access to an even wider selection of games.

PC gaming is almost always more expensive than any other option. Although the cost will vary, depending on the components you choose to use in your machine, it’s always higher because there are more variables and fewer economies of scale.

Consoles, in contrast, have always been much cheaper, at least in comparison. Adjusted for inflation, they have nearly always cost less than $500, while a gaming PC can cost several times more.

The cheapest option of all, however, is a smartphone. That’s not because smartphones are cheaper than consoles. In fact, the opposite is true. It’s just that you almost certainly already own a smartphone that is capable of playing most of the games available in its respective app store.

Traditionally, video games have been played in front of a TV screen or a computer monitor. The problem with both of these setups is that you are chained to one place whenever you want to enjoy your games.

There have been attempts to make consoles and computers more portable. Examples of this include the Sony PSP and the Nintendo DS, as well as third-party devices that could make a PlayStation 2 or original Xbox run from a car’s 12V socket.

Laptops can also be portable, but gaming laptops are even more expensive and can be very heavy, making it impractical to carry them around.

Smartphones, on the other hand, are the most portable. You carry them almost everywhere already and they fit neatly in your pocket, bag, or hand. Of course, this portability and flexibility come with trade offs like lower power and graphics quality, but many players are happy with such compromises.

Gamers are usually very passionate about their hobby, which is why many love to customize their setups to reflect their personalities. There are many ways to do this, such as styling your gaming room or area with RGB lights, adding custom skins to controllers, or even buying special edition hardware that’s themed around your favorite game.

However, if you want to take things to the next level, a gaming PC is just about the only way you can do it – at least without voiding a warranty or two. That’s because consoles and smartphones are, for the most part, closed systems that are designed to be bought and used out of the box. They’re supposed to “just work” with no need for tinkering to get up and running.

Gaming PCs, on the other hand, are very different. While you can buy off-the-shelf systems that are ready to plug and play, most computer gamers prefer to spend time choosing the specification of their machines, ordering the individual parts, and then assembling them themselves.

The result is some incredible bespoke machines that push the boundaries of engineering and creativity. Some hardcore gamers combine their love of games being pushed to the limits with their passion for tinkering, leading them to create complex liquid-cooled machines that look like they’ve been lifted out of a sci-fi movie.

Of course, this requires time, knowledge, and money – but it isn’t a requirement to play games on a computer. Rather, it’s just that PC is the only platform where it’s possible to exert such free rein on how you want to play.

Overall, there’s no single device that is “best”. Instead, it’s more about finding one that best meets your needs and wants as a gamer.