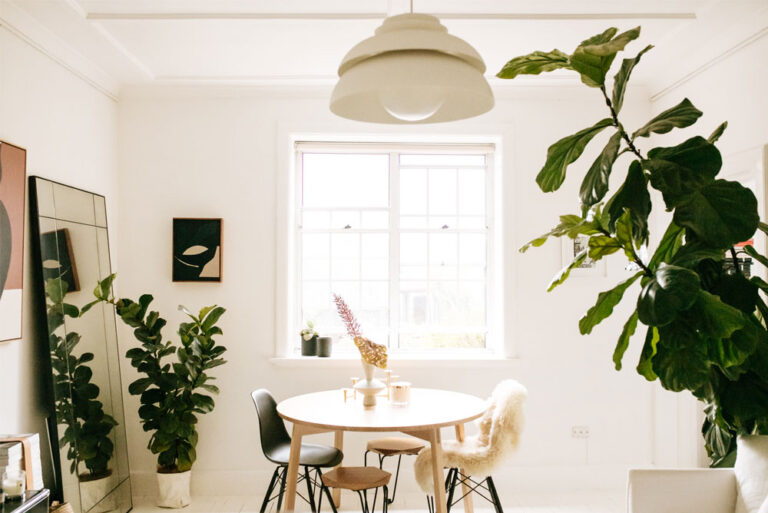 The founder of Badlands Journal and Badlands Studio, Talisa Sutton lives in the apartment with he husband Rohan Peterson. The apartment is situated in the Kensington, not far away from the Eastern Suburbs in Sydney. They are expecting a new member of the family as she is few weeks away from giving birth to their first child.

They found the apartment in 2016 and the first thing that caught their eye was the art deco character of the building. The magnificent thing about the building was the fact that there is sunshine during the day as it welcomes the natural day light as Sutton described.

As she gave us the tour through the apartment, she stated that the interior style is “Scandinavian minimalist meets California mid-century with a touch of Australian coastal style”. The lofty apartment is brimful with greenery.  Beautifully set sheepskin and linens makes the apartment cosy to the eye, yet not disturbing the art collection that still take the centre stage of the place.

“I keep my eye on paintings by local Australian artists including Hannah Nolan, Heath Newman, Bec Smith and Caroline Walls, and ceramics by Milly Dent and Mel Lumb,” shares Sutton her favourite artists. She added that she loves to shop for vintage homewares when she is going abroad while always trying to go to markets and antique centers. She confirms that she and her husband Rohan are lucky to have travelled together quite often. The small items and mementos they collected remind her of those travels. Those are the most cherished moments for her. “It’s also nice finding one off pieces that you know you couldn’t get anywhere else,” she adds.

The apartment depicts Talisa’s inconceivable taste and sense of style. It is something we expected not only through her Instagram feed but with Badlands Studio and Badlands Journal she and her husband established together. “Our backgrounds are both in graphic design and art direction, so we loved the idea of combining our skill sets to create our own design studio,” claims Sutton. “In February, 2019, we established the Badlands Journal, the editorial platform and digital magazine.” Their passion was always about the publishing, so it was pretty nifty to have the creative outlet by their own where they are able to share the new ideas.

As it can be seen, Sutton’s collection is as worthy as the rest of the apartment. As it is beautifully displayed on marble and mirrored trays, she said that notwithstanding the straightforward beauty regime, she always showed the affection for the beauty products and nice packaging. “I keep all of my oils and fragrances on display on trays or shelves, and my other day-to-day items live in the bathroom cabinet,” she explains.

Having shown the high affection for La Mer skincare, The Renewal Oil is the one she uses the most. “I love so many La Mer products, but The Renewal Oil feels particularly luxe and is the perfect consistency for extra hydration in the evenings. It helps give you a lovely, fresh glow the next morning, which helps fake an extra hour or two of sleep! For me, cleansing and moisturizing is a must, every day and night. I’m also a big believer in never leaving the house without SPF 50+, and, in the past year, eye cream has become my new best friend.”

One of the items she cherish the most is the painting from Christiane Sapnsberg. It is actually the gift between her and her husband, a Christmas and anniversary present. A pleasant wedding memory, and it has their names and wedding dates printed on it. Also, there is a Chanel bag she bought in Paris. As she confirms, it was a big shopping spree in Paris. She was not quite okay with it but at the end she was glad that she purchased the bag on their last day in Paris. She added that the purchase pin pointed the special moment in her career. She added and concluded “Running a business is hard work, and while I love every second of it, it was really nice to appreciate how far we had come, and that I could treat myself to something so special.”