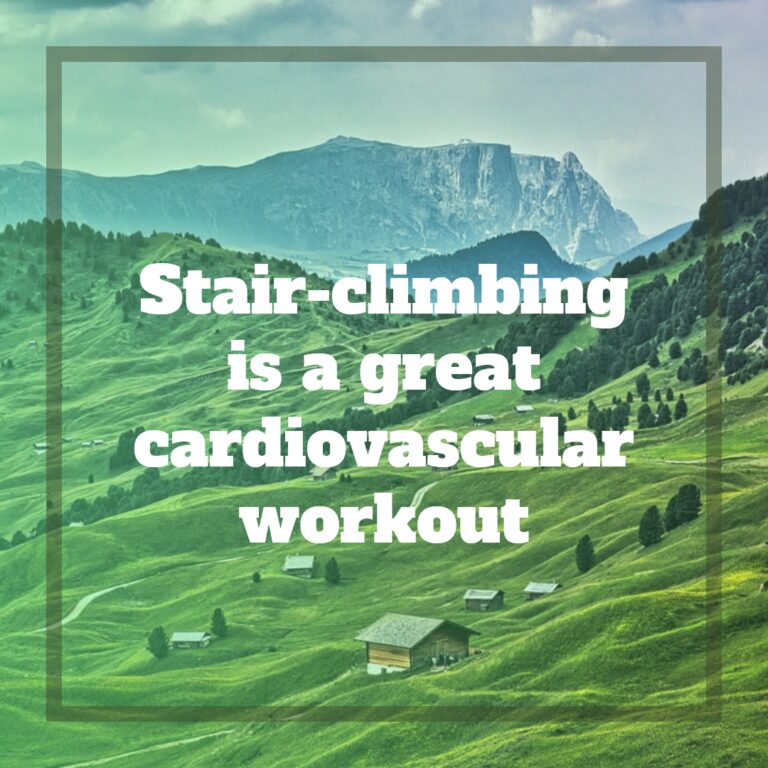 The lifts in our office have been under repair for almost a year.

For some of my colleagues, especially the fashionistas with high heels, it’s a test of patience to wait for the working ones; for the rest, we have no choice but to resort to using the stairs.

It’s a “forced” way to get us to exercise during work hours. The stairwell has also become a bumping point for colleagues from different departments.

If you work on the lower level floors, it’s not an issue, but when you have to climb up and down more than 10 flights of stairs without ventilation, and are overweight or have hip/knee problems, it can take a toll.

A cup of hot coffee in hand and a heavy bag slung over the shoulder add to the hazard.

Still, stair-climbing is a fantastic, free way to get a cardiovascular workout and strengthen muscles in your lower body, without the need for any skill, training or sporting prowess.

Besides helping increase stamina, it also improves bone density and muscle tone. This is especially important for women in sedentary office jobs as they have a significantly higher osteoporosis risk than men.

Any form of walking has health benefits, but climbing stairs doubles the amount of exercise compared to walking on a flat surface.

Within the same time frame, climbing stairs (slowly) burns two to three times as many calories as brisk walking on a flat surface.

Climbing stairs, one step at a time, requires you to pull your weight against gravity, which requires more effort, and in return, your health benefits accrue more rapidly.

Many hikers use stair-climbing as a training ground to conquer higher mountains. And this group of people, mostly older, are f-i-t!Stair-climbing is one of the cardiovascular exercises I give my dance-conditioning students, and at the end of the semester, 100% of them say it’s the hardest workout they’ve been subject to.

Because they’re young and pretty fit, I challenge them with different intensities and drive them to their limits.

At that moment, they shoot each other looks of hatred for the instructor and express regrets enrolling in the class, but at the end of it, they agree stair-climbing is a great way to gain results quickly.

The Harvard Alumni Study, one of the biggest scientific studies to date, found that men who climbed an average of eight or more flights of stairs a day had a 33% lower mortality rate than men who were sedentary.

The statistic is far better than the 22% lower death rate observed in men who walked 1.3 miles a day.

The calorie nitpickers will be heartened to note that according to some research, every stair climbed burns 0.17 calories, and every stair descended burns 0.05 calories.

An average flight of stairs has 10 to 12 steps, so if you climb one flight up and down, one step at a time, you’d burn roughly between two to five calories, depending on your body weight.

If you take two steps at a time, you’d burn more, as the muscles have to work harder.

Staircases can be found everywhere – in the office, LRT stations, hotels, stadiums, shopping centres, etc, so you can workout anywhere. But those without knee, foot or hip ailments are so spoilt that they’d find every excuse available to use an easier mode of transportation instead of their legs.

If you’re attempting stair-climbing for the first time, you probably won’t get far, depending on your fitness level.

Start slowly, and gradually build up to 30-minute bouts. Even just keeping it up for five minutes at a stretch is a great start, as several short sessions can provide the same benefits you’d get from a single, longer session.

For beginners, don’t be over-ambitious and take on too much, too fast, or you’ll risk injury or burnout. Proper footwear is important.

As the climbing becomes easier, add on a challenge by taking two steps at a time, then three or as many as your stride will allow.

Or, to increase the intensity, opt to run up slowly.

There are many ways to climb stairs, not necessarily forward. You can approach the stairs laterally, climb backwards or use your hand and legs to ascend.

Of course, climbing one flight of stairs isn’t going to get you fit overnight. Most people start to notice a difference in their fitness after a week, so every little step really adds up.

The added bonus: you might end up having great looking calves, thighs and butt.

When you embark on your stair-climbing routine, watch that you’re not straining your knee joint. A little pain that results from a good muscle workout may be fine, but sharp pain can signal other problems and should be a sign to stop exercising. A pain that gets progressively worse needs medical attention.

If you’re experiencing arthritis, heart or respiratory problems, then stair-climbing is not recommended.