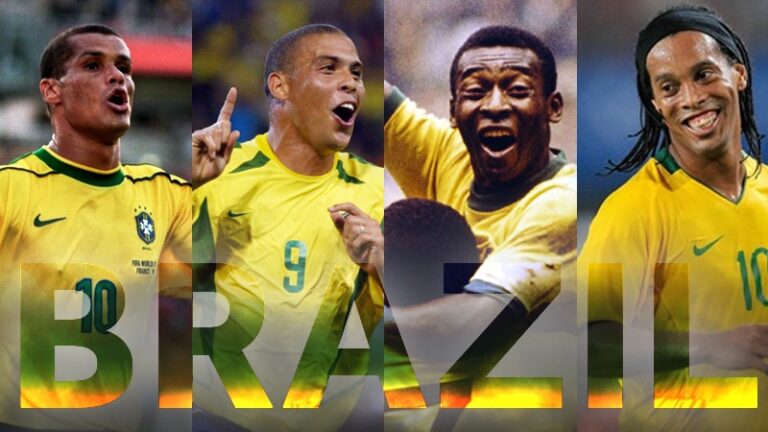 In Brazil, football is the nation’s most significant sport. Country of football, also known as ‘O País do Futebol’, the culture of football in Brazil is unique. This Latin American nation’s daily life and culture are profoundly influenced by this sport. It is a widespread passion that is present everywhere.

Check your knowledge and learn some interesting Brazilian football facts by reading on.

Brazil’s Football Culture Is a Way of Life

In Brazil, football is omnipresent! Kids engaging in street play with their pals, residents discussing games, players, or trades while chowing down on local fare at a nearby restaurant or bar, or employers offering employees time off to enjoy the FIFA World Cup matches, which will certainly be the case with the upcoming event in Qatar, are all commonplace. It is unquestionably a significant aspect of the Brazilian way of life and culture.

Did you know that there are over 776 pro football organizations in Brazil and that roughly 16,000 Brazilians play competitively throughout the world? This sport is incredibly popular not just in the country as a whole but also outside. This poured over to the sports betting sector in the country in recent years. The sports betting industry has grown significantly in Brazil since the pandemic’s start, reaching a peak of 76% annually. Revenue for the sector increased from R$2 billion (375.8 million USD) to R$7 billion (1.3 billion USD) as a result of this high. As a result, there have been a lot more sponsorships and collaborations between bookmakers, such as betting sites in Belgium that can be found at Bookmaker-Expert.Com, and sporting entities.

Young Kids Get Acquainted with the Sport Early On

Soccer is a common name for the activity in North America, whereas football, or ‘futebol’ in Portuguese, is the name of the sport in Brazil. Brazilian football is frequently taught in classrooms in addition to physical education classes or gyms, and children begin learning about it from a young age from their families and parents.

The game of football has rules that educate students on how to be ethical, responsible, persistent, and determined both on and away from the field. The rules are simply understood and adhered to by everyone in all facets of life, whether they are participating in competitive club play or playing with friends on the streets, fields, or beaches for enjoyment.

Football is significant across all socioeconomic groups across the nation. Children from underprivileged backgrounds often believe that football is their one chance for success. They begin to grow up dreaming of creating a better future for their families because they watch how accomplished pro players are and the way they got started. When questioned, a lot of kids all around Brazil will reply that they want to play football when they grow up.

Brazil Was Originally Exposed to Football in the 1800s

Football has become a significant part of Brazilian culture despite not being a local sport. There are many ideas and accounts of how this venerable sport first appeared in Brazil, but Charles Miller is generally acknowledged to be the person who introduced football to his own nation.

Miller left for study in England and came back to his birthplace, São Paulo, in 1894 with two game balls and a regulation book. Later, a son of a Scottish railway engineer taught others about the game he loved and is now known as the ‘father of football in Brazil’.

The renowned “Museu do Futebol”, or the Football Museum, in São Paulo currently has an interactive display about the background, customs, and artifacts of Brazilian football. It is located at one of Brazil’s oldest football grounds, Pacaembu Stadium, where games are being played today. The museum includes a monument to Miller and has 15 rooms with different themes that are a must-see for football fans.

Brazilians Can Relate Over Football

Brazilians can make new friends by playing football. They frequently support their preferred teams all year long in regional and national leagues, which can lead to fan-related problems. International gatherings like the FIFA World Cup provide a chance to get together and support Brazil’s football squad as a whole.

This national sport unites the entire population, regardless of age, racial group, gender identification, culture, and socioeconomic background, and ignites a spirit unlike any other. Locals can participate in recreational football games, join a football club for social purposes, or support their nation during the World Cup.

Brazil’s national football team has won more FIFA World Cups than any other country in the world, with five titles on their account (in 1958, 1962, 1970, 1994, and 2002). Brazil is the only nation to have always qualified for the FIFA World Cup, and it also holds the record for most goals ever scored.

Brazilians Even Have Their Own Football Style

Brazilian football players are renowned for having distinctive playing styles around the world.

Dribbling is their artistic movement, which is a true work of art to watch on the field. This is regarded as a complex maneuver in football, but if learned, it is among the most effective strategies to manipulate the ball off of an opponent and ideally score a goal!

The FIFA World Cup was twice hosted by Brazilian football, in 1950 and 2014. The nation had to modernize stadiums, airports, cities, and transport in order to get ready for such a well-known and popular international event.

The FIFA World Cup competitions were conducted all around the nation, notably in Rio de Janeiro’s Estádio do Maracanã, officially known as Estádio Jornalista Mário Filho, which was constructed to organize the first FIFA World Cup and updated for the second. The actual ‘temple’ of football and the largest stadium in Brazil, this location is a dream for every Brazilian football player and is a well-known tourist destination. Hotels and shopping malls were also modified to accommodate visitors from around the world. Brazil’s tourism sector had a significant uptick during the World Cups.

Do you have any other knowledge on Brazilian football culture? Post your ideas and remarks below…