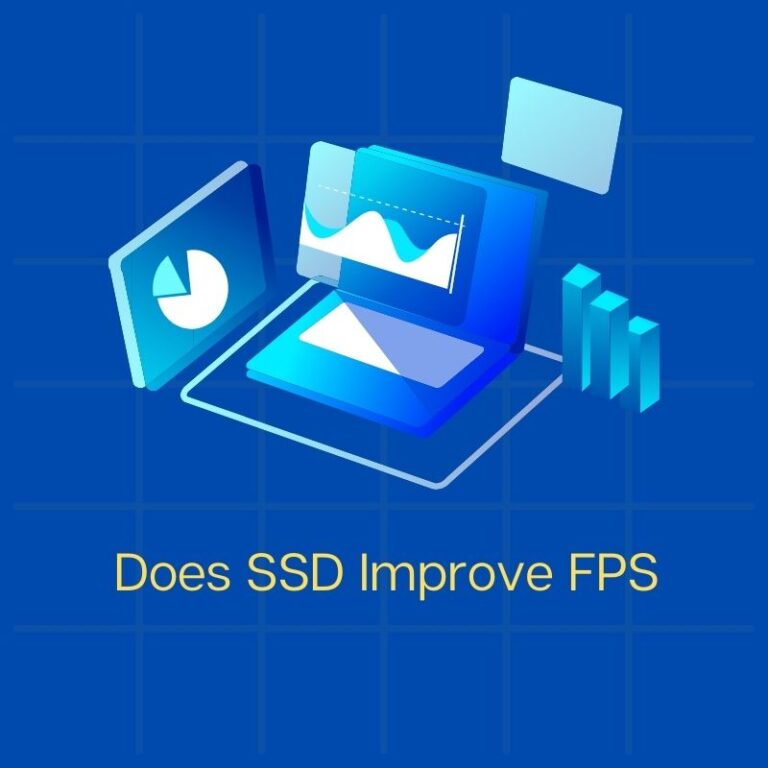 Does SSD Improve FPS? Well, to answer this question lets see what an SSD is. Solid State Drives (SSDs) are the fastest, quietest, and most reliable storage devices. And the biggest advantage is that they reduce boot time. Thus, speeding up your programs and games and ultimately making your computer much faster. And when it comes to Speed, there is a drastic comparison relative to conventional HDD.

Because it uses cells to store data and not a moveable disk as compared to conventional HDD, SSD provides much faster speeds. On average, an SSD provides a data transfer rate of around 500 MB/s and more. And whereas, an HDD will only provide you with an average data transfer rate of around 170 MB/s. So, we can say that’s a drastic drop in speed when comparing an SSD with an HDD.

But the rapid speed of SSD also comes with a cost. And you will have to pay extra when it comes to buying an SSD. And yes an SSD does improve your gaming experience. But, it does not affect the FPS (Frames Per Second). Because FPS does not refer to the data stored on your computer. Instead, FPS is the number of frames that the computer generates in each second. They are the 3D images generated by what makes your computer powerful: that is your processor and graphics card.

So, to answer the question Does SSD Improve FPS? The answer is no, it doesn’t. But it does reduce hitching in open-world games. Intel’s Adam Lake has described hitching as the brief pauses in games when they can’t pull assets from the hard drive fast enough to keep up with the player. And with the data transfer rate of an SSD, you don’t have to worry about the hitching problem while using an SSD. And SSD also amplifies your overall gaming experience.

If you are looking to buy an SSD. But you are confused about which SSD to buy. Samsung T5 SSD is the best SSD available in the market today. And if you want to know about the amazing features of this SSD, do check out our Best External SSD For Gaming. It surely will help answer your queries and you can buy them too.

If you can compromise a bit on speed and are looking for more budget-friendly options, then HDD is what you have been looking for. And it provides you with an average speed of 100 MB/s. And you won’t have to pay this much too. So, do check out our Best  External Hard Drive For Gaming Laptop.

In conclusion, Does SSD Improve FPS? The answer is no. But an SSD will improve your gaming experience with its amazing data transfer rate and capacity. SSDs are also compatible with gaming consoles so you store dozens of games. It also improves the overall experience of your computer by minimizing boot time. If you are a serious gamer, you might want to invest in one. Although an SSD isn’t going to give you a higher framerate in your favorite games, it will offer gamers an advantage over traditional hard drives. And, that is in boot times. Games that are installed on an SSD will typically boot faster than games that are installed on a traditional hard drive

The WD Black P10 Game Drive is Western Digital’s external drive dedicated to gaming. It’s more strong and durable than most typical drives which make it a great option for transporting your data around. And it’s futuristic design makes it cool. It’s black/silver casing protects it from minor bumps and drops thus, increasing its durability. Because of the following factors, WD Black P10 Game Drive is our top pick in the Best External Hard Drive For Gaming Laptop.

It works extremely well with PC, PS4, and Xbox One.

The P10 Drive comes with a minimum of 2TB and a maximum of 5TB capacity. And this capacity is large enough to store dozens of games and this is the best external ssd for gaming laptop.

The average speed of P10 comes around 130 MB/s which, compared to most drives is an above-average score. Because of its speed, this HDD can run games directly without lagging.

P10 Drive is made specifically for gaming. And because of that, you can run your games on this drive for hours without worrying about the over-heating problem.

Because of its exceptional futuristic and slim design, this HDD is extremely easy to move around and enjoy your games anywhere you want. And its durable metal and hard plastic shells protect it from bumps and drops.