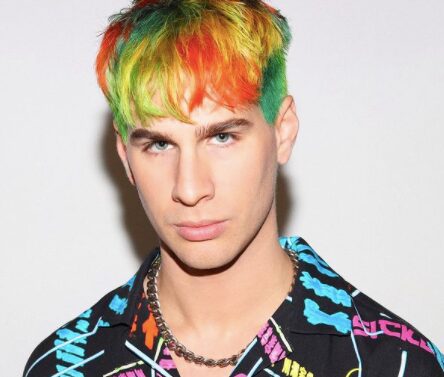 Who is Brad Mondo?

Brad Mondo is one of the most famous hairstylists. He has a self-titled youtube channel with more than 7 million subscribers.

In his channel, he posts videos of reactions to hairstyles and dyes, makeovers, and hair education.

His most viewed videos are him reacting to Jojo Siwa’s hair and America’s Next top model makeovers.

Moreover, he is the CEO and Creative Director of XMondohair and XMondoColor.

The talented Mondo has got to work with many celebrities such as Shay Mitchell, Charlie D’amelio, Vanessa Hudgens, etc.

Not only he’s a talented hairstylist but also a successful model.

With a handsome face and a charming personality, he has a pretty good modeling career. 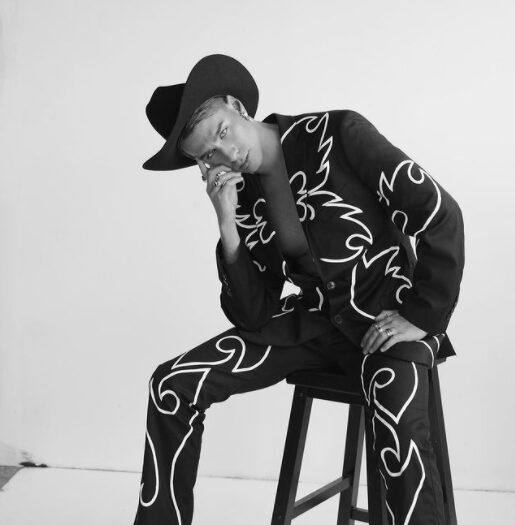 He didn’t become famous overnight. He has earned all of his fame through many years of hard work and passion.

You will get to know about his journey and more details about him in this article furthermore.

Where was Brad Mondo born? Mondo was born to a salon owner in Franklin, MA, New York.

As his father was a salon owner and he has always been intrigued by the beauty and fashion industries.

Hence, he followed in his father’s footsteps and pursue his passion.

In the interview with Insider, he talks about how he used to experiment with his hair in his father’s salon.

He grew up playing with the mannequin heads.

Ultimately, he was fascinated by 90’s hairstyling books and takes them as an inspiration still.

According to him, he was rebellious since his childhood and didn’t like being pressured to work in a hair salon by his parents.

Due to this, he started working in Calvin Klein as a sales associate when he was only 16.

Soon he got to realize his actual love for the fashion and hair industry. Consequently, he decided to work in a salon.

What’s Brad Mondo famous for? Mondo’s fame journey was not easy and he earned it with all his passion and hard work in the beauty and hair industry and YouTube too.

He earned his first income from YouTube when he was just 16-17 years old.

He currently has over 7.12 million subscribers with millions of views on his videos.

His channel is famous for funny reactions to hairstyles’ failure, his hair tutorials, pranks with his brother Eric, and makeovers.

He is also the CEO and creative director of his hair products line “XMONDOHair’’ and “XMONDOColor”.

He has talked about expanding his team of XMONDO and launching more colors and hair products in an interview with GAY TIMES.

During quarantine, he blew up in TikTok too where he made several videos reacting to people’s hair cuts and crazy hair dyes.

He collaborated with different youtube channels such as Tamron Hall Show where he talked about hair education. Also, he talked about how his hair products got more demanded in quarantine in an interview. 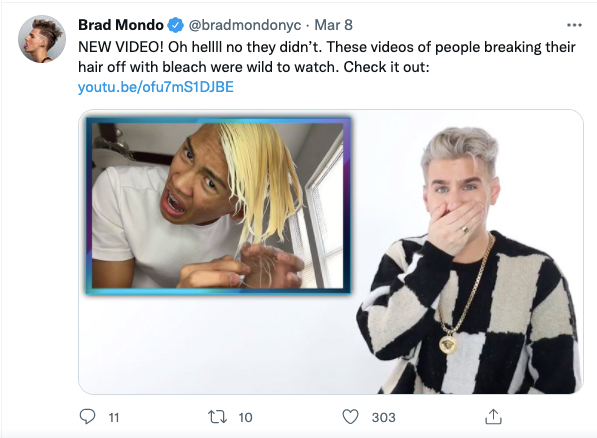 In 2022, he got nominated in Beauty Category for YouTube Streamy Awards.

How much does Brad Mondo weigh? Mondo’s weight is approximately 75 kg and his height stands at 5 feet 11 inches or 180 cm.

He has Grey-Hazel colored eyes and blonde hair. His birth sign is Scorpio.

His ethnicity is Caucasian and he is a Christian. Mondo has always been opened about his sexuality as a gay.

He has said in an interview with Glamour that he looks up to Kim Kardashian and Kylie Jenner and admires them a lot.

His favorite quote is “Live Your Extra Life’’ and he has his merch of Pullover Hoodie named on it. 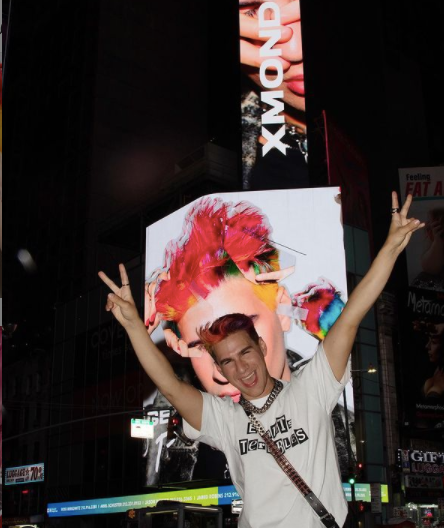 Who’s Brad’s Lover? Though Brad is open about being gay, he has not revealed his love life anywhere.

How many siblings does Brad have? Brad grew up along with his brother Eric Mondo. Eric is also a quite famous social media personality.

His parents are unknown to the media however, Brad posted a photo of him and his siblings with his father and revealed his demise(April 22, 2022) on Instagram.

Eric too posted a photo with their father on Instagram 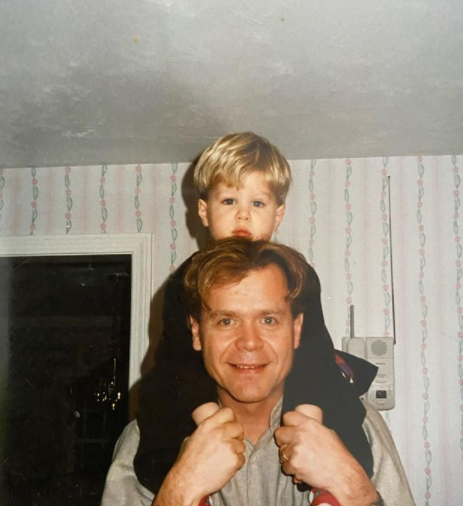 How much is Brad worth? Brad is a successful hairstylist, entrepreneur, and YouTuber.

Most of his income is from his YouTube Channel and his hair product lines.

As of 2022, he has over 7.12 million subscribers and he receives an average of 650k views per day from several sources.

Moreover, he also has his merch of pullover hoodie of his favorite quote “Live Your Extra Life’’ 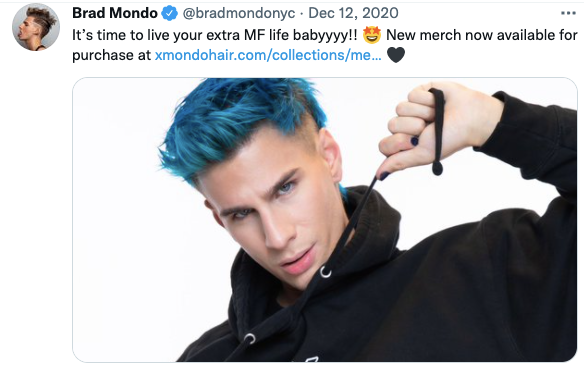 What are some of Brad’s notable controversies? Brad has got into many controversies such as the vegan hair product issue, Twins mess, etc.

Brad got under fire for his products is not fully vegan. He always talks about all his products being vegan and cruelty-free including his Glitterati Styling Serum.

However, few fans noticed that it has an ingredient called Carmine which is a pigment made from crushed bugs.

As a result, fans got outraged that Brad lied to them. The cruelty company also claimed the logo of cruelty-free on the product was indeed fake.

Consequently, this created lots of scandals and many fans and customers were upset as they were not even refunded.

Likewise, Brad’s brother Eric is also a popular media personality and a model.

Brad and his brother Eric have made many videos with titles containing the word twin.

Meanwhile, Brad’s fans were excited as many loved their twin videos.

But as the videos started getting more and more views the controversy started to stir up.

Soon, his fans started to dig up and found out Eric was 1.5 years older than Brad.

This angered many fans and they were upset about the lie.

However, many defended Brad stating that titles might be in a sarcastic way as fans used to claim how similar Brad and Eric used to look.

On the other hand, both the brothers have not said anything related to this topic. 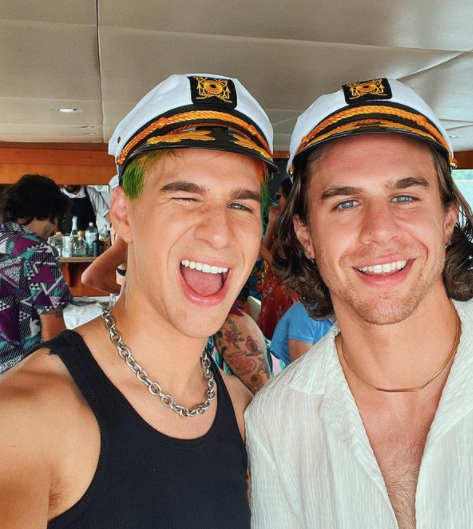 XMONDO Color is semi-permanent and does fade with washing.

Where can you buy Brad Mondo’s hair products?

Can I get an appointment with Brad?

Brad currently does not have availability for hair appointments and consultations.

What if I need advice for my hair?

You can take Hair Quiz on the XMONDO page and know your ideal hair type and needs.

Check out Brad and Eric video down below: