Australia is a peculiar land. For many, it’s a summer paradise. For others, it is a place where some of the world’s most venomous animals live. It’s a surfing Mecca and a place where sharks can often be seen. It is full of opposites, and that’s what makes it so great. For anyone who hasn’t been to the land down under it is a location that should be on everyone’s bucket list. Are you adding it as we speak?

What’s the first association you have with this country? Is it the Sydney Opera House, or the Australian Open? Maybe it’s koalas and kangaroos’? Yes, there are many things that make Australia known to the world. Gold Coast is of course one of them. Due to some huge landmarks that are what makes it so recognizable some smaller but great things about it remain neglected. As a land of immigrants what you have in abundance is very specific foods. Many cultures and customs have interchanged to provide us with some of the world’s most distinctive cosine on the planet.

Let’s be honest here, food is not the first association when we speak about Australia, right? Yes, that’s true. But, things should change in this department. This article is going to be the first step in making it so. To make the introduction easier, we’re not going to start with some fancy or complicated foods. Instead, we’re going to focus on the simplest of foods – sandwiches. They’re easy to make, one would argue, but the best ones are state of art and there’s no arguing it. So, to prove a point we are going to talk about four of Australia’s most essential sandwich recipes to try in 2023. Check them out and tell us what you think.

This one is unique. The name says it all. But, it’s so good that it transcends the borders. Don’t be surprised if you encounter this one in the land of the rising sun where it’s quite popular.

What makes it so great are of course ingredients. As the name says the primary one is of course spaghetti. They’re contained with a little bit of sliced bread. Of course, if that’s your preference you can opt for a bread roll. Furthermore, you make it what it is by adding some butter and grated cheese. The spicy end comes from the sauce of course, and in this case, it is made out of onions and tomatoes. While often this sandwich is made out of fresh spaghetti you’ll not harm by making it out of leftovers. If you’re using leftovers you must use the same sauce. If you’re starting from scratch spaghetti is prepared with the sauce. The selection of your bread is then buttered, and covered with spaghetti, sauce, and cheese. You put another slice of bread on top and cook it that way further. In some cases, it can even be served cold as it is. While it sounds peculiar it is not. When you look at the fact that the only ingredients you’re going to need are some tomatoes and onions, spaghetti, bread, and butter you understand that it’s unique a straightforward recipe. It’s not like we’re talking about Elk Meatballs & Shallot Gravy from Game of Thrones. 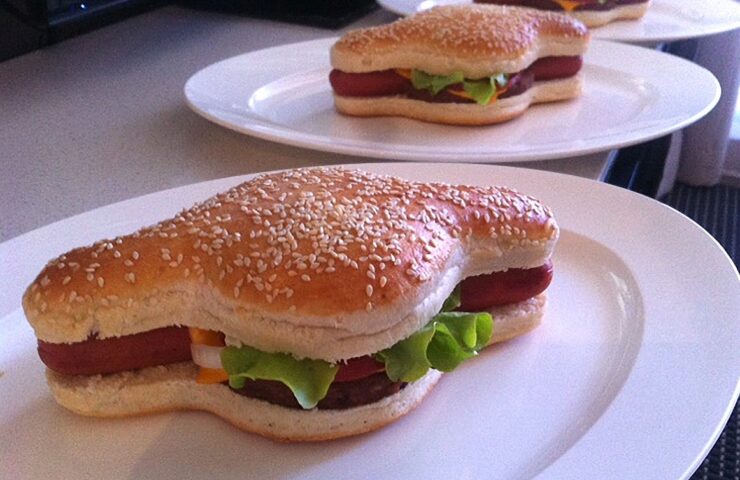 Yes, this one sounds like one of those wild dingos that steal babies in Australia. But, it’s not. It’s something tastier originating from the western parts of this continent. This one was invented way back in 2004 and the name behind it is Mark Murray. To make it the right way you’ll need a specific sort of bread shaped particularly for this occasion. The rest of the ingredients include a half-cut beef patty and some frankfurter sausages. The name hamdog suggests that we’re talking about a hybrid sandwich. It is something between a hot dog and a hamburger. You can hardly imagine a better combo than this. Maybe Xavi and Iniesta in the glory Barcelona days, but that’s another gravy. To make it spicy like the Barca’s 2015 treble you need to add some sauce, onions, tomatoes, lettuce, cheese, and pickles. A sandwich of this magnitude gained some popularity all over the world. You won’t be surprised to hear that it even featured on Jimmy Kimmel’s late-night show. Talk about food of fame. 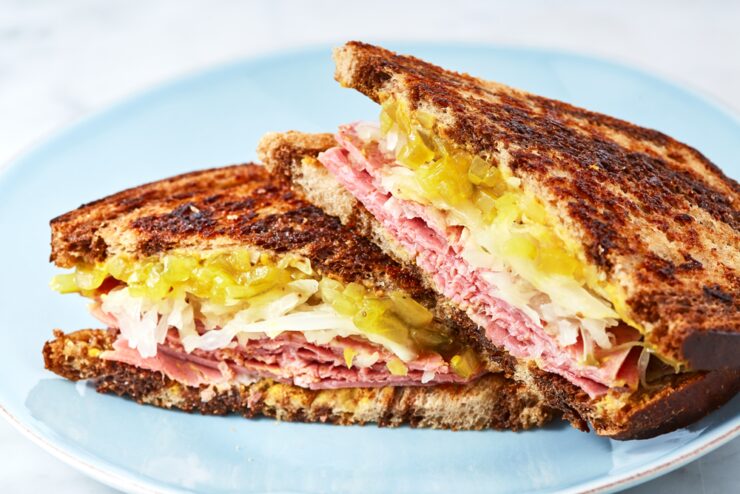 This one is a classic. As old as beef and mustard. This one covers wide areas of the known world. In addition to Australia, this one is rather popular in the UK and India. You see a connecting dot here. We’re talking about the British colonies. Corned beef bodes well with mustard and pickles and if you haven’t tried out this masterpiece waste no more time. We’re talking about a sandwich that’s centuries old. Thanks to this it has some quite perky ingredients such as Swiss cheese, sauerkraut, Thousand Island dressing, caramelized onions, horseradish, and rocket. If you want to make it a little bit fancy the corned beef mustard sandwich can be dressed in some parmesan, carpaccio, red onions, pest, and of course, all put in between some slices of buttered white bread. If you fancy this one click for Sandwich delivery in Sydney and see if omeio.com.au and similar outlets can deliver one to your home address. It will be worth any trouble.

Let’s track back a little bit. Classic! This sandwich is the definition of simple is the best motto. This one is adored by all people in Australia, but the young ones are the ones that made it so popular. As we said, it’s as simple as one gets. All you need are two slices of bread, some fritz, and tomato sauce. If you’re not familiar with the term fritz it refers to a sausage that’s made out of pork, beef, and lamb mixed with some seasoning, flour, and starch. The two slices of bread need to be buttered, and after that, you cover it with fritz and the sauce. As we said, it is as simple as one gets. When you know the sheer simplicity of this one, you can tell that this one was invented by Germans. Yes, they excel in making complicated things such as some Mercedes and BMW models, but when it comes to sandwiches the one that Germans brought to Australia is straightforward as they get.