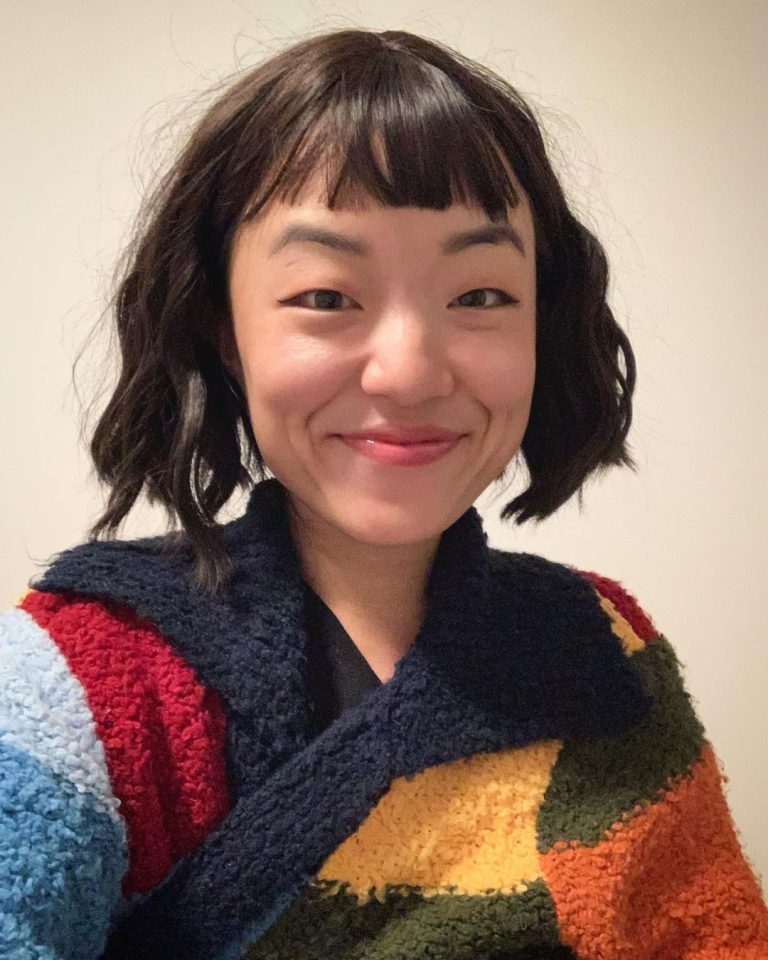 Who is Andrea Bang?

Andrea Bang is a Canadian actress and writer known for her role as Janet Kim in Kim’s Convenience.

She has also worked as a filmmaker and screenwriter in short movies such as Lucky Dies, Play Date, Karaoke Mamas, Schnitzel or Spaetzle, Idol Never Dies.

Similarly, her sister Diana Bang is also a popular actress.

In this article, you will get to know about Andrea’s age, height, relationship, career, net worth, and even more.

Where was Andrea Bang born? Andrea Bang was born in Burnaby, Canada, and raised there by her Korean immigrants parents.

She grew up with her sister Diana Bang who is also a famous actress and writer.

Regarding her education, she graduated with a degree in Psychology from the University of British Columbia in 2012.

She was also taking acting classes besides her studies. Since her childhood, she loves the fictional character Buffy the Vampire Slayer.

Since her childhood Bang was intrigued by acting and theatre drama.

Before joining acting, she did many non-acting jobs and played around.

Her first paying job was working at Lotto Centre.

In an interview with Vancouver Sun, she revealed that she held her interest in acting for a long time and finally decided one day to give it a shot.

Andrea is a popular TV actress, screenwriter, and filmmaker.

Andrea got her very first role as a chorus member in a high school production of Bye Bye Birdie.

Later she had her first debut with Sum Theatre’s Pull Festival.

Similarly, she has appeared in many short films such as Playdate, Closet People, Bon Bon Fire, Net Working with James, Lucy Dies, Under the Supermoon, In Loving Memory, and many more.

She gained popularity after appearing in a short film Fran and received an award for it later.

Besides short films, she has done several movies like The Prodigal Dad, Camp Death III in 2D, and Adventures in Public School.

Her role in the hit movie Luce made her even more famous.

This talented actress has also starred in different series like Running with Violet, Hudson & Rex.

Andrea’s big break came when she played the role of Janet Kim in a famous TV series Kim’s Convenience for which she was nominated for a Canadian Screen Award.

Besides acting, Andrea is famous for her filmmaker and screenwriter career too. She has written numerous short films and directed them.

Bang worked as a screenwriter in short movies such as Schnitzel or Spaetzle, Playdate, Lucy Dies, Karaoke Mamas, and Idols Never Dies.

Also, she produced and directed the short film Karaoke Mamas.

Andrea has also worked as a digital image technician in Schnitzel or Spaetzle.

Other than that, Andrea is equally famous on social media platforms. Currently, she has over 87.9K followers and she shares photos, videos regarding her projects, daily life.

She has black colored eyes and black hair. Regarding her nationality, she is a Canadian.

There’s no information about her ethnicity and religion.

Well, it is known that Andrea is from Asian Descent.

Besides writing and filmmaking, Andrea loves cooking, swimming, and traveling.

Her favorite book to date is The Best Kind of People by Zoe Whittall.

Who is she dating? Andrea Bang is currently single and not dating anybody.

She’s very private about her life and keeps it away from the spotlight, so there’s no information regarding her past relationships and linkups.

As for 2022, she’s not married yet and doesn’t have any children.

Andrea was born to Korean immigrants parents and lived there within Burnaby, Canada.

There’s no information regarding their profession and current residence.

Bang does have a sister Diana Bang who is also a famous actress and screenwriter.

Diana is famous for her role as Park Sook-yin in the American political action comedy movie The Interview.

What is the net worth of Andrea Bang? Andrea is a bonafide actress, filmmaker, and screenwriter.

She earns most of her income from acting, filmmaking, and screenwriting.

Also, she earns from paid sponsorships and brand endorsements.

As of 2022, the net worth of Andrea Bang is estimated to be $9 million approximately.

What nationality is Andrea Bang?

Andrea Bang is a Canadian actress, screenwriter, and filmmaker. Her parents are Korean who migrated to Canada.

What is Andrea’s ethnic background?

She is of Asian descent as she was born to her Korean immigrants parents in Burnaby, British Columbia.

Is Andrea on a million little things?

Yes, she is one of the actors of A Million Little Things, portraying the role of Claudia.

Check out the random video of Andrea Bang down below: